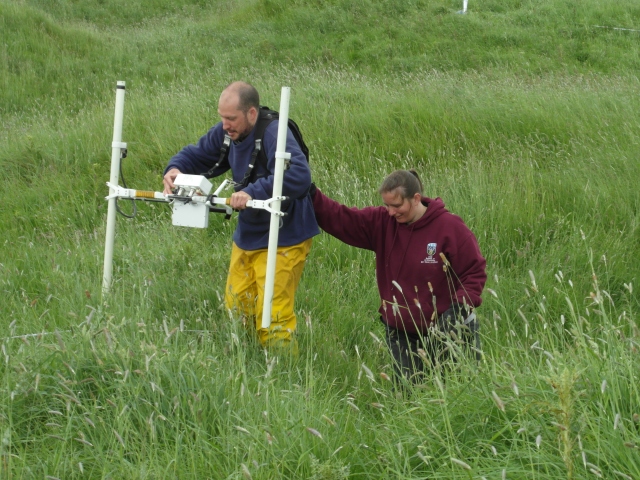 In 2012 a small grant from the Heritage Council enabled us to undertake quite extensive geophysical survey at the Hill of Ward and a number of localities in the immediate area (the embanked enclosure, Wardstown deserted settlement, the northern enclosure banks). This was undertaken in collaboration with Dr Chris Carey, formerly of the Universities of Exeter and Birmingham, his field assistant Hannah Ventre and a number of volunteers from the School of Archaeology, UCD. Conditions at Tlachtga in Summer 2012 were difficult. A relatively warm spring (relative to 2013 at any rate…) had led to the thistles and nettles having a particularly fine start to the year. Given the occasionally steep and treacherous nature of the banks and several days of near horizontal start of our survey we did remarkably well. Some results to follow! 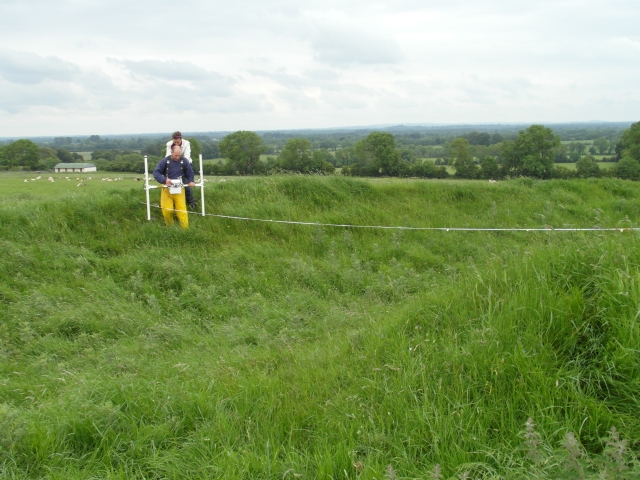 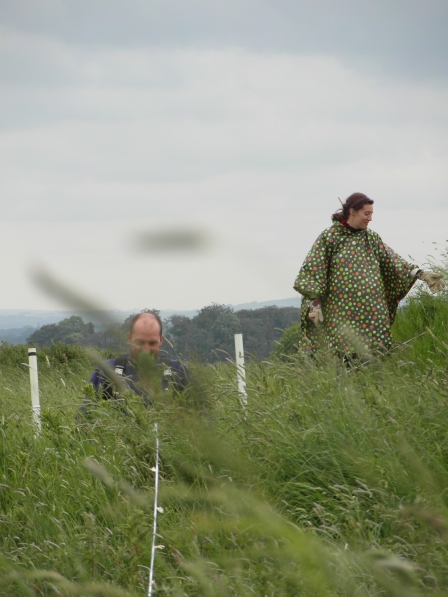 Two fields to the east of Tlachtga lie the clear remains of a previously unrecorded medieval settlement (now allocated the SMR No. ME030-034—-). This clearly occupies at least one field and may stretch further to the northwest where the central hollow-way of the settlement gives way to a raised, straightened bank on the west side. 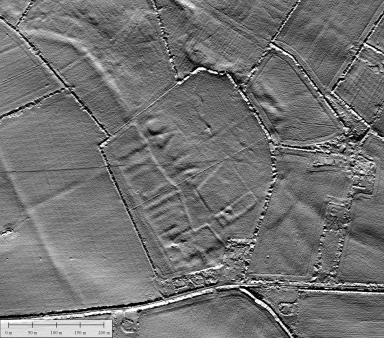 Approximately nine burgage plots are distributed along the western side of the field with irregular raised areas to the east. In the southeast lies a large subrectangular enclosure (c. 110 x 90 m), itself sub-divided and with an apparent rectangular foundation in its southwest corner. The pattern of field boundaries in the surrounding area is extremely suggestive and clearly radial, radiating away from the central area of the settlement field. This suggests a possible earlier (perhaps early medieval) core to the site.

1.5 km to the north lies the ruined 15th century church at Rathmore, formerly the estate of the Plunkett family (see Leask 1933). This also appears to have a series of burgage plots associated with it, again to the west, as well as a range of other features of possible archaeological interest. The site of Rathmore has recently been the subject of an undergraduate dissertation by Siobhan Rheinisch of Sligo IT, who has kindly provided the lidar image. Rathmore has recently been very much in the news over the theft (and, thankfully, subsequent return of its well-known octagonal font base (http://voxhiberionacum.wordpress.com/2013/05/15/rathmore-font/). Again, it is hoped that the fields around Rathmore, particularly to the southeast, will be the subject of future funding applications. 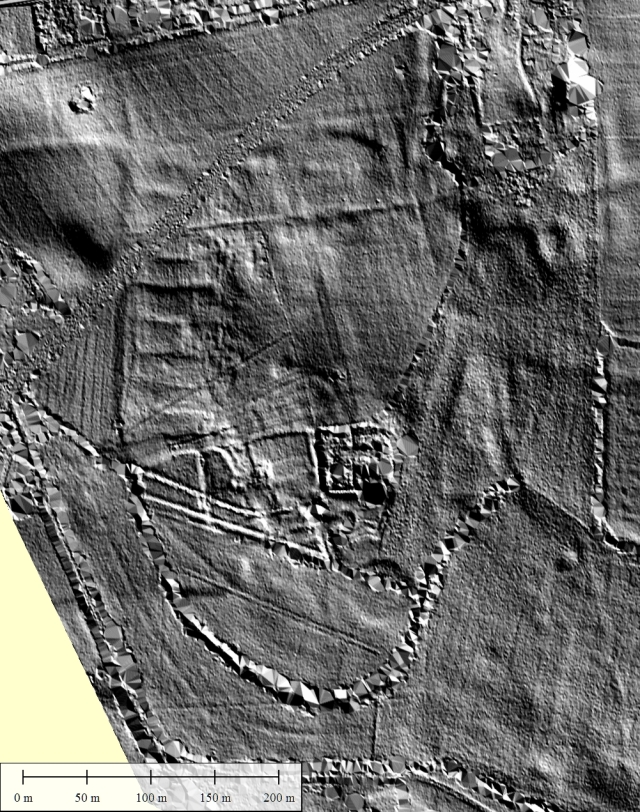 At the base of the Hill to the east, in the townland of Rathcarran, lies a large, Boyne-type embanked enclosure (previously unidentified, now assigned the SMR No. ME030-035—-). This is very similar to monuments of this type in Brú na Bóinne: c. 160m in diameter with very low banks (in this case no more than 1m), sloping downward slightly to the northwest and with a slight dome centrally, characteristic of interior scarping from which the enclosing bank was created. This is considerably further west than other Meath examples of this site type, and, assuming it is a late-Neolithic feature (as we assume these embanked enclosures are), implies significant earlier prehistoric activity in the area. 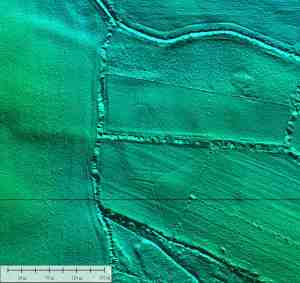 One obvious place for such activity would be the hilltop itself. To the west of the road lies what appears to be a significant cairn (clearly visible in the field). Earthworks in this western field also appear to be suggested by early aerial photography. A second potential cairn feature lies within Tlachtga itself and comprises all or part of the central portion of the monument. 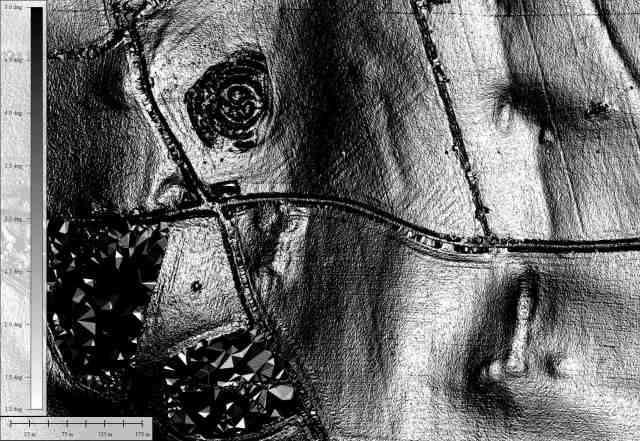 Slope shaded relief model showing western cairn (across the road from Tlachtga) and ‘esker’ to the east.

Between the hilltop and the embanked enclosure lies a low ridge, marked in the GSI Quaternary dataset as an esker, although of peculiarly linear form. This ridge also includes three possible mounds, the southernmost on top of a low hill. It is hoped that these will be the subject of future rounds of geophysical survey.

To the north of the main enclosure are the remains of a pair of parallel embankments. While almost entirely destroyed, these may once have been significant features. The distance between the two embankments is c. 65 m and they appear to be carefully located to cut off the lowest approach to the summit of the hill. There are possible traces of enclosure to the southwest of the Hill also, giving some suggestion that the entire hilltop might once have been enclosed.

Slope shaded relief model of the outer embankments at the Hill of Ward. Two potential lines of defence are evident: inner paired banks and an outer ditch, along which a possible standing stone was located.

The presence of such an enclosure would suggest that the origins of Tlachtga lie earlier than the early medieval period to which ringforts (although Tlachtga is not in any sense a typical ringfort…) generally belong, perhaps as a Bronze Age hillfort or hilltop enclosure. If the entire hilltop were enclosed the overall size of such an enclosure would have to be truly massive – nearly 900 m along its long axis (roughly three times the size of Rathgall, Co. Wicklow and larger even than Brusselstown Ring, Co. Wicklow) by 550 m across.

There are suggestions of an enclosing feature even further to the north, where a ditch running parallel to the ‘inner’ enclosures follows the line of an old field boundary. In the 6″ and 25″ OSI mapping a standing stone (St Lawrence’s Stone) is marked on this boundary, potentially marking the northern limit of the site. Local folklore suggests that the St Lawrence’s Stone was removed mistakenly to the churchyard of St Laurence, Rathmore (a large stone certainly stands within the churchyard).

Conor Newman (2005) draws attention to two other standing stones to the east of the hill, while a possible third may have lain in Rathcarran townland, again to the east.

The central monument of Tlachtga itself is an impressive earthwork. Measuring approximately 135 m in diameter from outside of bank to outside of bank, it is also surrounded by a scarping (presumably providing some of the material from which the outer banks were constructed) to an additional width of c. 15 m around the entire circumference. The number of known quadrivallate enclosures is very low, and includes Rathra, Co. Roscommon (http://goo.gl/maps/aPjif), the Rath of the Synods at the Hill of Tara and the enclosure at Rathdrinna, Co. Tipperary, currently the focus of an excavation project (http://www.facebook.com/Rathnadrinna). Tlachtga differs markedly from Rathra and Rathdrinna in that the majority of the monument is taken up with its vallations leaving little room for a large interior space. The central mounded portion at Tlachtga measures c. 50 m in diameter, significantly more than a third of the total diameter of the monument. This is closer to the situation at the Rath of the Synods, where the total monument diameter is c. 85 m while the inner enclosure is approximately 32 m in diameter.

Tlachtga, Hill of Ward. Note linear feature and possible cairn to the west of the current road.

The Hill of Ward, near Athboy, Co. Meath is home to the spectacular quadrivallate ringfort of Tlachtga (‘Earth-spear’). Reputedly the birthplace of Halloween and home to a long-standing Samhain fire-festival, the monument takes its name from the daughter of the legendary Mog Ruith, the alleged executioner of John the Baptist. 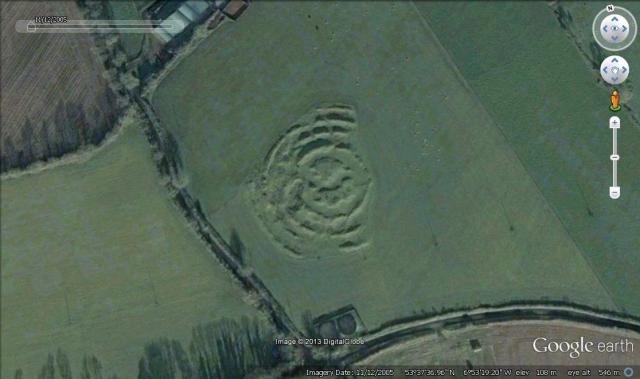 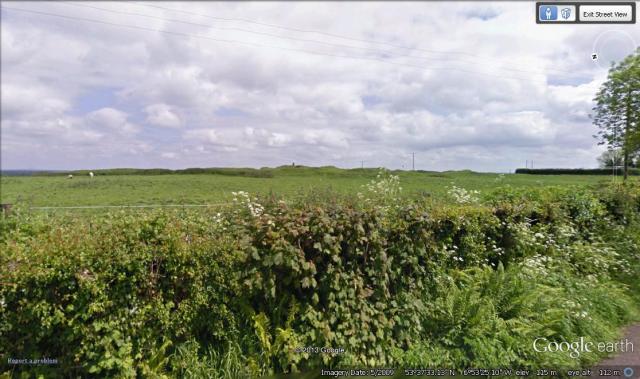 This blog is intended to follow some recent discoveries and ongoing research at the Hill of Ward and its environs.

Recent work with lidar (Light Detection and Ranging) at the site has revealed a range of potentially interesting features and has greatly increased our understanding of the archaeology of the area. Prior to this the number of recorded monuments in the area was very low, with Tlachtga itself accompanied by a holy well (ME030-030) and a church (ME030-002) known as Temple Cuimhneas (the Church of Remembrance). Newly identified features include a deserted medieval settlement at Wardstown, an embanked enclosure similar to those at Brú na Bóinne and a pair of parallel outer embankments to the north of Tlachtga itself. I will discuss some of these in more detail in future entries.

Current plans are progressing towards some geophysical survey this summer, concentrating on the monument of Tlachtga itself, the embanked enclosure and the outer embankments. 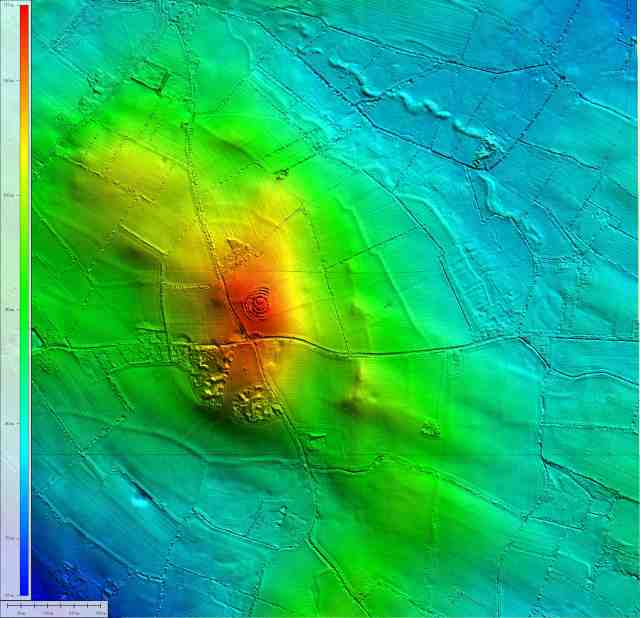